Many people are interested in Trey Anastasio and his guitar effects pedals, as he is well known for using Ibanez Tube screamers and Ross compressors. Here is some info.

On 12/19/02 I had a chance to see Phish and meet Trey Anastasio during their rehearsal for the David Letterman show which would be shown that evening. I thank Sid McGinnis, the lead guitarist in the Worlds Most Dangerous Band for this opportunity. I called Jim Weider to see if he would like to join me on a trip to the City and he was in, we would also check out all the guitar shops while there and get some good Sushi and Sake!!! Before heading up to the Ed Sullivan Theatre, we visited 30th Street Guitars which is one of the coolest guitar shops in the country. Then we bolted and grabbed a cab uptown.

We met Sid outside the back entrance where dozens of Phish phans were lined up to try to see their heros. We hung out in the dressing room with the rest of the CBS Orchestra for a while then went out to the stage for their rehearsal. 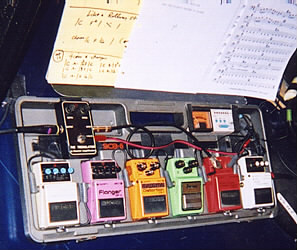 Sid showed my his Boss pedal board with the modified DS-1/Pro he is using. Sid installed the JRC inline chip himself (not easy!) as he initially had our SUPER mod but was not really happy. Now he likes the PRO a lot, and after their practice he gave me another of his DS-1 pedals to modify for him. If you check out Sid's board now you should see our King Of Tone pedal and Sunface NKT on it too. 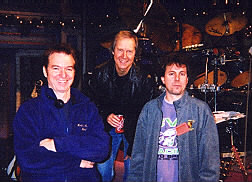 When we were standing on stage checking out his guitars ('55 strat and relic Telecaster) Will Lee, the Bass player, told us we looked cool and he would take our picture. I asked Will to get in the picture but he declined, as he said he wanted the picture to be COOL. This is the picture he took of Sid, Jim Weider, and me. I think that is my NYC RAEL pose? 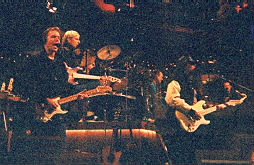 Soon the bald one (Paul Shaffer) gave us a glare so we got off the stage and they practiced a few numbers for the show, here is a shot I took from the front row of Sid, Will, and Felicia Collins, with Tom "bones" Malone just visible in blue. Tom plays on some of Jim's albums as well as being an original Blues Brother, etc. The show was being rehearsed in full, including a segment where Tom Hanks was sitting in the front row and told to go back to the green room by an angry audience member. Jim was Tom's body double for the rehearsal. He loves show business :-)

I had a good chance to talk to Brian Brown, Trey's guitar tech, while Phish was getting ready to practice. Trey and Brian have spent a good deal of time A-Bing the TS9/808/silver against his old tube screamers. Trey liked our SILVER mod better so they are using two of them now onstage. Trey also liked my Bicomprossor so he bought a second as a backup, and a backup pair of TS9/808/Silver pedals. Trey had used our TS9/808/Classic and DynaRoss pedals when he wrote the songs for the new album Round Room. Below is a picture of Trey contemplating new music, taken by Chris Metaxas who is the engineer at TRONAX and was working with Trey. You can see the pedals he used from left to right: wah (he normally uses a Teese RMC3 in plain black Dunlop case), Analog Man TS9/808, unknown pedal, Analog Man DynaRoss, and Boomerang. 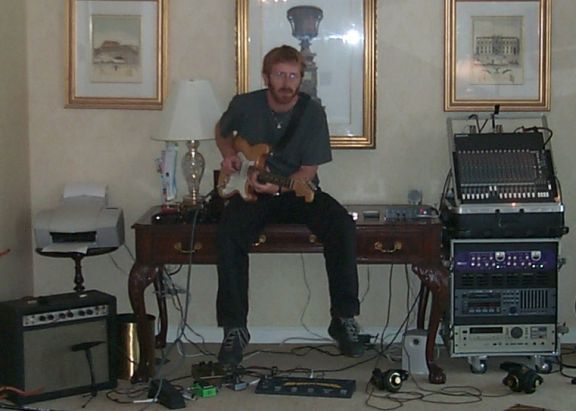 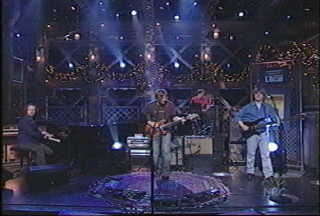 The Letterman show only gives 3 minutes to set up, which is not enough time to arrange Trey's pedals. So they would play a mellow folksy song, All Of These Dreams, and plug straight into the amp for this show. The complete pedalboard was set up on Saturday Night Live the previous week as seen on the SNL screen shot on the left. On SNL, Trey had pedals all around him with the two SILVER tube screamers on his right. He has his Black Cat Vibe in one of the four loops on his Bradshaw switching system and used it at the end of one of the two SNL numbers to good effect. 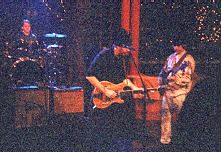 Back to the Letterman show, here is a shot I snapped without a flash from standing next to Paul's Hammond, both Trey and Mike Gordon were wearing hats to keep warm. Mike removed his for the show. Dave keeps the stage COLD all year round, possibly to make Drew Barrymore's blouses look much nicer. Trey's Deluxe Reverb is slightly tweeked, with NOS 1940s (!) military RCA 6V6 tubes, with frosted glass. He is currenty running it into a 4 x 12" Bruno cabinet with Celestion G12 Alnico speakers. This is a small cabinet for a 4 x 12"! 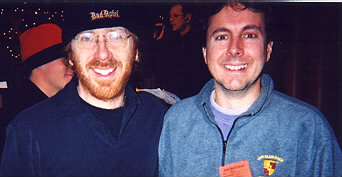 After the rehearsal Sid introduced me to Trey. Trey seemed excited about the pedals. He was extremely friendly and quite happy. He should be, as his band is doing great, with thousands of people looking forward to the upcoming MSG show and the tour in February. I hope I can attend one of their shows. I think I was perhaps a bit too smiley in this picture, which Jim snapped for us (my hair was not looking great, glad he cut it for me!).

Phish had a new album and played live again, to bring in 2003!

In the summer of 2003, Trey sent me 2 more of his used TS9s for the silver mods. He has a box full of pedals according to Brian, who pulled these 2 out and sent them to me. The one on the right had a cracked circuit board so I sent a new one in it's place. The one on the left was modified and returned. We also sent a CLONE chorus, I hope Trey enjoys it.

There are knob settings visible on these pedals. But Trey tweeks his settings quite often so these may not be his current settings. But in case you would like to know, they were set at:


Here is a shot of Trey's area from the New Year's Eve shows in January 2004:

I got to see Phish on this 2004 tour, here is some info and photos I took.

In 2005 Trey started a tour with his new solo band, and got four more of our TS9/808/silver pedals, with bright yellow LEDs. Two are for his guitarist/keyboard player Les Hall and two for one of his many pedalboards, each which has a pair of these on it. 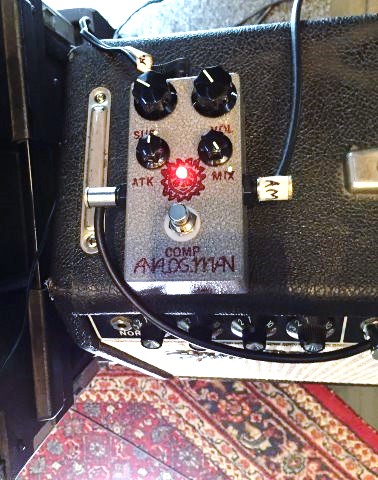 We did some Way Huge SUPA PUSS mods for Trey in 2015, as the BLEND on them comes up too fast, he just wanted a little delay so we found a mod to make it easier to dial in. Then in mid 2016 his old ROSS comp was finally on it's last legs so he tried our new REV5 small compROSSor with MIX and ATTACK knobs, seen on the right. He liked it more than the Ross, and got two more for backups. He soon went back to the old Ross, as he loves his fans who got it for him, and he is probably just more used to it.