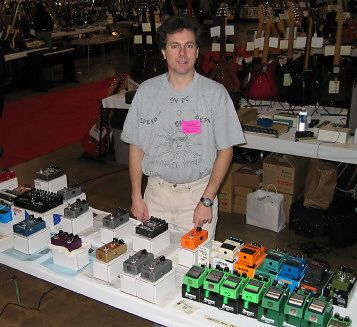 We made it down to this fine show again and brought mostly our own pedals and pedals we had modified. Ohbayashi san, CAMTAC, came to the USA to attend the show and display and sell some of his special mods. He worked with me for a few days, tuning the new King Of Tone pedal, and doing some more mods and R & D work. 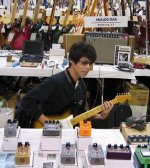 Here is Ohbayashi san demonstrating his Boss MT-2/Pro mod. He came up with a cool mod for them, then I found a way to remove the fake processed sound and noise, and together the mods make a great pedal! You can see the King of Tone pedal on the right and the tonequest King of Tone issue leaning on my Deluxe Reverb amp. His modified pedals were brought to the show:. 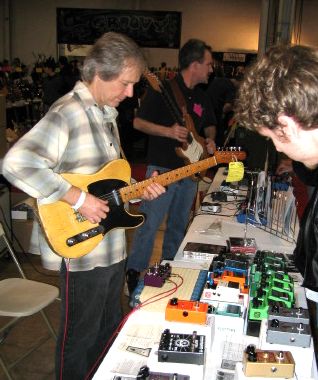 Here is Jim Weider, who came to demonstrate the King Of Tone pedal which he helped design. Jim brought his favorite Tele and was getting some amazig tones... we sold all of the KOT pedals that we brought except one we needed for a demo. Dave Fox is demoing his new ZIM pedal in the background.

Here is another shot of Jim and Dave taken by Ohbayashi san. 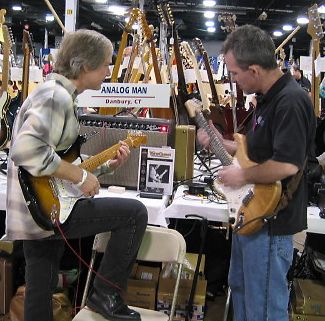 Here is Jim giving some lessons to Dave. Jim's playing a '57 strat reissue which I sold at the show.

Hope to see you at a show in the near future!