Here is the story about how Kenny Wayne Shepherd got hooked up with using pedals from Analog Man.

Robb McMahan, the www.kwsband.com webmaster, is also a fine guitar player. You can see him on the photos on the web site for the practice for the TROUBLE IS...DOUBLE tour jamming with the band. In 1998 I did an Ibanez TS-9 808 mod for Robb and he REALLY liked it, so I sent him one for KWS to try and Robb recommended it and gave it to him. In early 1999 Robb told me KWS was using it on tour and wanted some more. So I made 2 more and later modified 4 more of his existing ts9 pedals. One is a TS9DX.

Here are three of his pedals that I had in for maintainence. Roy Kelly, Kenny's guitar tech, puts bright gaffer's tape on the pedals so they can be seen onstage. My red smiling sun stamps are on the sides, and my labels are above the power jacks.

Here is Roy setting up the pedalboard before the summer tour. Just behind Roy is one of Kenny's Twin Reverb reissues which he uses live (with BIG 12" EV speakers), and his warmup amp, a VERY CLEAN Vibroverb with 15" speaker, just like Stevie Ray Vaughn used. 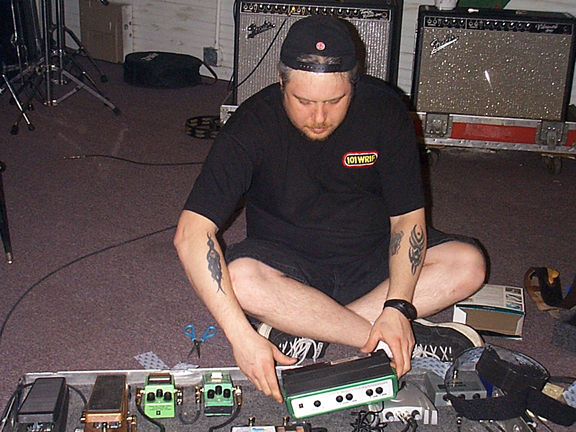 On the left is the Dunlop univibe speed controller, next is a Dunlop 535Q wah. Then my ts9/808, then an old TS-808. Roy is holding a Line 6 delay pedal. Next is a Roger Mayer Octavia. The other box is a switchbox or "snuff box" which allows KWS to kill the guitar signal to the amp and send it to the tuner only.

On May 25th, 2001 Analog Mike finally got to meet Kenny Wayne Shepherd, who had been using the Analog Man modified TS9/808 Tube screamer pedals since late 1998. Kenny wanted to check out more pedals, the FOXROX electronics Captain Coconut and the Analog Man Clone Chorus, along with a Teese RMC3 wah and modified fuzzface. 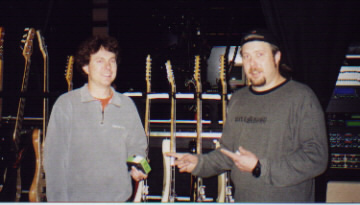 I met Roy before the show, we planned on setting up the pedals onstage and trying them. But there was a scheduling problem with Lizzie West, one of the warmup acts, so we could not set up on the main stage. Here we are standing in front of the strats on the side of the stage. Roy gave me one of the TS9/808 pedals to check out when I got back to the shop. His quote during the picture was:

ANALOG MAN IS THE SHIT!

I brought the pedals to the dressing room and set them up there instead, while Roy was setting up the guitars. 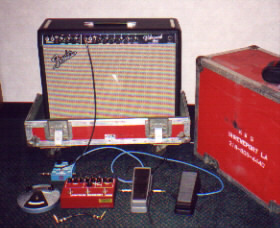 Here are the pedals I brought, with the old Vibroverb. From left to right are the Analog Man USA fuzzface (modified dunlop), Analog Man chorus, Foxrox Captain Coconut, Teese RMC3, and modified univibe speed controller for the Captain Coconut provibe.

Just before showtime, Kenny showed up and tried the pedals with a nice Relic Strat. He liked everything, and told Roy to put the Chorus and Captain Coconut in his pedalboard for tonights show! Roy nearly had a heart attack but I told him it would not be a problem and I would help him get it working. Little did I know how short time was between Double Trouble's set (SRV's band) and KWSs, and how much work Roy had to do. Here is a small shot of me and KWS.

Here was the old pedalboard, with the same effects as I mentioned above in the picture with Roy. You can also see the Dunlop univibe here. 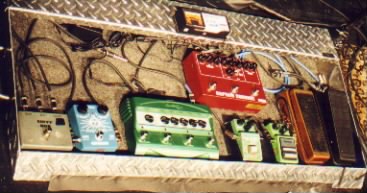 Here is the new pedalboard, with the Captain Coconut replacing both the Roger Mayer Octavia and Dunlop Univibe, and the Chorus added. This also gave Kenny a fuzz which he did not have previously. The pedal order we used was Guitar -> wireless -> Wah -> TS9/808 -> TS-808 -> Coconut (fuzz, octave, vibe order) -> Line 6 delay -> Analog Man Clone Chorus -> Switch box -> Tuner or amp (two Super Reverb Reissues).

Here is Kenny onstage, moving too fast for my slow film. I was hanging out with Roy at the side of the stage near the guitars. You can barely see the captain coconut poking out of the board. Kenny started using the Analog Man Chorus a bit on the first or second song, set to a fast leslie sound, with the speed at about 4:00 and the depth about 12:30. He soon started to kick on the chorus A LOT for solos and chords, was really enjoying it! When he came to the side of the stage to change guitars he gave me a big smile and thumbs up and said he loved it. He then ventured to the Captain Coconut, using the fuzz foot a few times, and the provibe. The test was going to be BLUE ON BLACK, which features the octave and also a vibe/leslie sound. I was surprised when he kicked the Chorus on at the start and used it about the whole song for rhythm work. The coconut's octave was used for the killer solo, and he was able to get a good octave sound. Kenny uses HUGE strings, custom sets put together with the low E bigger than a bass guitar's high string! And HUGE frets too, Dunlop 6100s, the biggest frets made. He's a skinny guy but has VERY STRONG hands to play such a difficult guitar, but that is where the TONE comes from - big strings and frets, high action, and strong hands. I called Roy towards the end of the tour and he said the Chorus and Captain Coconut are still in the board and working great. He can't get Kenny to turn the Chorus off, and he's really getting into the Captain Coconut now, using all three of the effects in it. 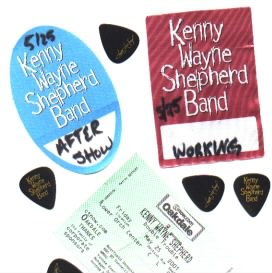 In May of 2002, I talked to Roy again and found out they would be playing in Philly, which is not too far from here. So I decided to head down with Dave Fox and bring some pedals and catch the concert. It was a private benefit show with a bunch of doctors in attendance, with Keb Mo as warmup band and Double Trouble playing as Kenny's band!

I met Dave somewhere in NJ, and we headed down, and somehow took the right exit after crossing the bridge into Philly, and ended up right at the Electric Factory. We walked right in past the guards, I guess we looked like we knew what we were doing, but nobody from the band was there except Roy, sleeping in the dressing room, so we didn't bother him. We contacted Robb by phone and learned the band would be there in a while, so we waited around.

Soon they showed up and we spent a bit of time in the dressing room showing the guys the new CC2 and the Foxrox TZF flanger. Here is Kenny checking out one of my TS9/808 pedals along with the Flanger and CC2. The expression pedal is for the flanger, you can do manual flanging which is REALLY cool when you set it up for over-the-top flanging when it cancels out the sound in mid sweep. We will be selling these flangers in late summer or so.

Here is another shot with Dave helping out. My snuff box is sitting on the amp and he is playing the CC2 with a CC2 expression pedal that I built out of a new univibe controller.

Dave convinced Kenny (easy) and Roy (difficult!) to put the flanger on the board to try in the show. Here is what it looked like, with my chorus and new SNUFF BOX. The snuff box kills the signal to the amp and sends it to the tuner for tuning, with true bypass. Kenny was using the chorus nearly every song, sounded great! (Dave was not convinced...).

Here is what the snuff box looks like up close. Has an input, output, and tuner out. Simple but effective.

After the show, AnalogMike with KWS and Double Trouble!!!!

I finally met up with Kenny and the guys again when they brought this show to my area. Here is more info and pictures of the Experience Hendrix show


Hope you enjoyed this info on KWS, I will try to keep it updated.